Genies, a startup that makes virtual avatars out of musicians, celebrities and, very soon, everyone else, is moving from Venice to a 20,000-square-foot converted warehouse in Marina Del Rey. The move comes on the heels of Genies’ $65 million Series B fundraise. The new space is five times the size […]

Genies, a startup that makes virtual avatars out of musicians, celebrities and, very soon, everyone else, is moving from Venice to a 20,000-square-foot converted warehouse in Marina Del Rey.

The move comes on the heels of Genies’ $65 million Series B fundraise. The new space is five times the size of the startup’s former office; it includes a recording studio, screening room, 25-foot ceilings and enough space to double the company’s current employee count of about 60.

It’s both a necessary step to accommodate the company’s aggressive hiring plans and a bet on L.A.

“Genies’ commitment to Los Angeles further demonstrates the unique offering only this city has,” said Raise Commercial Real Estate’s Mac Burridge, who represented Genies on the deal. “The confluence of entertainment and technology has never been more prevalent and companies like Genies are the reason for L.A.’s quick recovery.”

It’s go-time for Genies following the fundraise that brought tech veteran Mary Meeker onto its board. The company also recently brought on a new head of talent to lead the ongoing buildout of its executive team.

“Silicon Beach I don’t even think is a fair way to describe Los Angeles tech anymore,” said Burridge. “I think Los Angeles is a tech hub, whether your office is in the Valley, Downtown or in the South Bay and everything in between.”

The deal is part of what Burridge describes as a “tidal wave of demand” for office space in Los Angeles coming out of the pandemic.

“Momentum hasn’t, I don’t think, ever been as hot as it is right now,” he said. “There’s never really been 12 full months of pent-up demand that’s hit the market all at once, and that’s what’s happening right now.”

What’s the Value of an Avatar?

Genies has established itself by partnering with and building virtual avatars for celebrities including Justin Bieber, Rihanna and Russell Westbrook. The company says it controls “99% ownership of the celebrity avatar market.” Last week, hip-hop trio Migos became the latest to render themselves into avatars with the company. Genies has also partnered with Warner Music Group to bring its avatar technology to the label’s expansive roster.

Sporting a digital avatar can help celebrities advertise their milestones and ventures through an expanded online presence. It also offers potential for profiting from the so-called metaverse – the growing confluence of virtual worlds, social interactivity and commerce – by selling digital wearables and collectibles.

As for Genies, Adams, the COO, said the purpose of building avatars for celebrities is to encourage fans to adopt avatars of their own.

“That really shows users firsthand the potential of an avatar and how it can augment their digital and social experiences,” he said.

Genies plans to launch a consumer app in the fall, where users can create their own avatars. Adams is working to craft partnerships that will enable those characters to travel across the digital universe. One established partnership is with GIPHY, which allows users to create GIFs that are shareable across numerous platforms.

Adams said Genies is currently testing its consumer-facing app with a small cohort. It plans to launch the app widely in conjunction with the digital goods marketplace that it is building with Dapper Labs, the blockchain company behind NBA Top Shot.

Genies does not share revenue or profitability figures but sources say the key challenge facing the company is whether they can become financially sustainable.

The marketplace is key to those plans. Genies will use it to create, market and sell digital goods, including NFTs, sometimes in collaboration with a brand or celebrity, for example to accompany an album release.

“When you think about our avatar itself, it really needs to sit in that flywheel where a user can buy something in our marketplace, they can adorn it on their Genie and then use it across their various digital experiences,” Adams said.

Raising $65 million unlocks opportunities like investing in a new office and hiring a team to realize that vision. But it also comes with newfound pressure.

“The stakes definitely get pushed up,” Adams said. “We have the resources to execute and now it’s really just on us to make it happen.”

From Your Site Articles

Related Articles Around the Web

Thu Jul 8 , 2021
Subscribe to The Economical Brand name through e mail for Absolutely free! Almost nine out of 10 Gen Z shoppers (87%) nevertheless prefer standard banking vendors to the competitive neobanks and fintechs who are dominating the information, in accordance to a new analyze by Marqeta, a fintech payments platform. “While […] 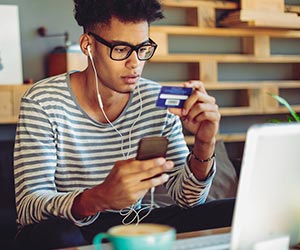